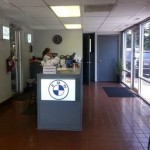 EuroTune is a friendly, independently owned full service automotive diagnostic and repair shop. We place high importance on the value of exceptional service and skilled car repair, alongside honest and fair prices.

Our specialty is European makes, but we have the diverse knowledge and skill to service any vehicle. Alignments, tires, AC, brakes, and more, we strive to become your complete automotive service provider.

EuroTune is a dream of Daniel Heindl and David Devereaux, the two EuroTune owners, who are highly skilled and passionate about car care.

Daniel Heindl grew up in Midlothian, VA. and earned a Bachelor of Science in Business with certificate in small business and entrepreneurship from Virginia Commonwealth University.  He has worked for a local Mercedes shop and has also worked at the Jaguar dealership level.

Daniel is a Master level BMW technician and has a passion for finding creative mechanical solutions and building relationships with customers. Daniel enjoys working on classic BMW’s in his spare time. He autocrosses a 1982 E21 3 series BMW. His current daily driver is a 2003 530 BMW. Daniel loves coffee and is up for trying new local spots when given the chance.

When he’s not at EuroTune, Daniel enjoys traveling and fixing up his Midlothian home with his wife. 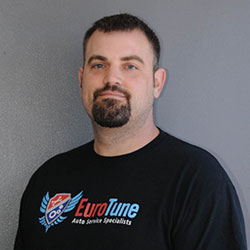 David grew up in Prince George, VA. He earned a B.S. from Chowan University in NC. David has over fifteen years of experience in the the aftermarket auto parts and repair industries.
David has worked at three independent shops, in addition to his three years in service at a local BMW dealership. His first car was a 1985 T-bird with a 351, and while he appreciates the fine engineering of European vehicles, he still likes the rumble of Ford V8s. He’s the original owner of a souped up 35th anniversary
limited edition Mustang GT which he put a Cobra engine in, and owns a Ford F150. David also owned a 1994 Ford Lightning, a F250, and two other Mustangs, in addition to a sweet BMW 530,and a BMW 525.

David enjoys working on classic cars, as well as the high-tech cars of today. Some of his favorite projects were done in his home garage, including a 1950 Buick and a 1965 Mustang.

When he’s not at EuroTune, David stays busy with his wife and two daughters